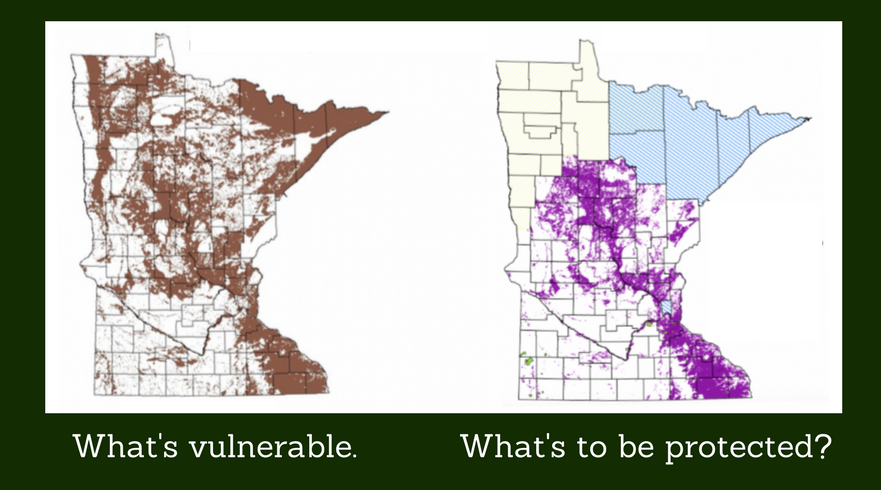 On the left: All of the vulnerable groundwater areas subject to part one of the proposed nitrogen fertilizer rule in the 2017 preliminary draft. On the right: Coverage areas in the current proposal, with fall nitrate restrictions in purple and exempt areas in pale yellow and striped blue.

While the final rule language won’t be released for public comment until May, the announcement outlined some major changes to the state’s draft rules, with improvements in some areas and major flaws in others.

The 1989 Groundwater Protection Act was adopted to give the state authority to prevent contamination of our groundwater and drinking water in Minnesota. We can all agree that clean, safe drinking water should be accessible and affordable for everyone regardless of geography or income.

After decades of delay, however, 537 public water supply wells across the state have elevated nitrate levels, and roughly 10 percent of all private wells in vulnerable areas already exceed health limits. This excess nitrate in groundwater is closely tied to agricultural fertilizer use.

FMR and our allies had major concerns with the original preliminary versions of the rule. The original draft fails to protect public health and fails to prevent private and public contamination throughout the state. The revised plan makes some improvements, but it's unclear if it goes nearly far enough.

Revisions: The Good, Bad and Uncertain

Some proposed changes are important improvements to the draft rule. That said, some very serious flaws remain.

Many rural cities and townships already suffer from elevated nitrate levels in their public water supplies. The revised rules would include new protections for lands inside the “Drinking Water Supply Management Area” (wellhead area) for communities with elevated levels of nitrate in their public wells. This change was requested by FMR and our allies and we are grateful for its inclusion in the revised rule and thank the Minnesota Department of Agriculture for this important change, which allows modest new protections for drinking water supplies for rural cities and townships with public wells.

The (really) Bad: Unsafe private wells out of luck

The revised rules leave private well-owners out of luck.

Let that sink in. The state is choosing to deprive itself of its decades-old authority to address private well contamination, even if it knows public health is at risk. And public health is at risk: about 10% of tested private wells are already above the health risk limit. In some communities, that number is above 40%. But rather than act, the agency is deciding that the status quo is acceptable.

The MDA's rule sacrifices the best interests our most vulnerable families - those least able to protect themselves - for political expediency. This is especially troubling given that in some at-risk rural communities, homeowners simply do not have the resources to protect themselves from contaminated water.

This approach violates the MDA’s moral obligation to prevent contamination of our water, and defies the very purpose of The Groundwater Protection Act. Despite hundreds of public comments in support of fixing this provision, the MDA is choosing to leave private well owners out of luck.

The revised rule dramatically reduces the state’s prohibition of fall/frozen soil nitrate application. The original rule targeted areas where soils were most hydrologically connected to groundwater (i.e. places where we know soils leech lots of nitrate into drinking water supplies). After pushback from farm organizations, the rule was scaled back. The revision excludes northwest Minnesota, based in part on its topography, soil type and climate.

Elsewhere in the state, the fall/frozen soil prohibition would apply only in areas with coarse-textured soils or karst topography. However, several experts have pointed out that some areas with coarse-textured soils were also removed from the map. Why? When pressed, MDA staff informed us that: "At this point, we're not able to discuss details other than what was in the press release. We'll be in touch once we get approval to share more."* As a result, serious questions remain about the decision to greatly limit the scope of part 1 of the rule.

Since the just-released revisions have not been put into official rule language, key questions remain about how they will manifest in a final rule. The devil is, as they say, in the details.

The proposal also includes a "Progress Underway Exception" to allow a one-time break for communities that are making progress but not at sufficient speed to avoid regulatory action. This is a good tool to help turn down the temperature in areas where pushback on the rules is strong. However, it’s unclear how this exemption process will work, and how future commissioners may or may not apply it.

At least five bills have been introduced in the legislature seeking to alter the rules or simply prohibit the MDA from adopting them at all. More info on those bills – which we hope do not advance this session – is available on our legislative blog.

The state has offered highlights on the process moving forward:

While fixing this rule is critical, FMR believes that the long-term solution to our water quality challenges is the development of market-based cropping systems that are good for clean water AND maintain farm profitability. While specific controls on the most problematic practices are useful, we greatly favor a more pro-farmer, market-based approach that protects public health and clean water through innovative cropping systems that provide an economic boost for producers.

That’s why we strongly support investment in alternative cropping systems through the University of Minnesota’s Forever Green initiative, and deployment of those systems through market-based approaches like the Working Lands Watershed Restoration Program.

By investing in alternative cropping systems, Minnesota can improve the results of our nitrate fertilizer rule and protect and land and water while maintaining farm prosperity and supporting our rural economies. Is this way, we can protect clean water, keep our families and communities safe, and maintain a healthy and vibrant agricultural economy. It is a win-win-win for Minnesota.

FMR River Guardians will be the first to know about opportunities to help advance this legislation during the coming 2018 legislative session. If you're not one already, we encourage you to sign up! River Guardians are also invited to special events, including happy hours, where we discuss important legislative and metro river corridor issues.