Flint Hills Resources (FHR) is among the landowners that FMR has been working with to restore their portion of the ecologically vital Pine Bend Bluffs Natural Area. Starting with a natural resource management plan developed by the Minnesota Department of Natural Resources and FMR in 2000, FMR has been heading up the effort to restore native prairie, oak savanna and oak forest on the FHR site, in partnership with Great River Greening. 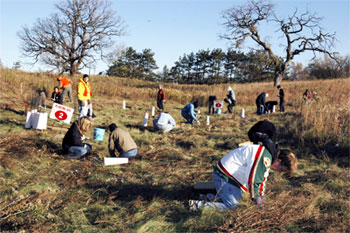 Volunteers learn to think like squirrels at this acorn planting event at the Flint Hills Resources restoration site in October 2006.

The Pine Bend Bluffs Natural Area cover an extensive area of woodland, wetland and prairie on the west bank of the large bend in the Mississippi River, about five miles south of downtown Saint Paul. The name of the area is derived from the large white pines that used to grace the bluffs prior to European settlement. A few of these trees can still be seen, towering above the canopy, especially at the Pine Bend Bluffs Scientific and Natural Area.

FHR's bluffland property contains about eight acres of high quality sand-gravel dry prairie, which is a rare natural community in Minnesota, especially in the Twin Cities Metropolitan Area. Our initial restoration efforts in 2000 began with a focus on protecting and enhancing these dry prairie remnants. The process has involveed 20 years of occasional prescribed burns, regular removal of encroaching woody plants, annual management of invasive non-native weeds, and restoration of the adjacent plant communities. The rare plant, Jame's polanisia, known at only a handful of sites in Minnesota, is monitored annually and continues to thrive at the site.

The non-native cheat grass (Bromus tectorum) has been the most invasive plant at the prairies, but the management efforts have largely maintained the native plant diversity.

In addition to the sand gravel prairie work, other accomplishments include:

When this project began in 2000, there was an area adjacent to the bluff prairies that had historically been oak savanna. Overtaken by common buckthorn, which choked out the ground cover and understory plants, the only evidence of the former savanna was some of the bur oak trees with spreading branches. The invasive plants were removed, along with a good number of non-savanna trees, leaving scattered, beautiful, old-growth oaks. The area was seeded with native savanna species and intensively managed for many years, with prescribed fire, mowing, goat browsing, spot-treating weeds, and overseeding. After many long years, the area very much reflects a savanna, with scattered clusters of bur oaks, a moderate shrub cover, and ground cover of prairie plants.

Wildlife seem to agree that the restoration has what it takes to be a savanna, as redheaded woodpeckers, the iconic savanna species, stop by for a visit every spring (though not yet noted to be nesting there).

The other animal to appear at the restored savanna in 2019 was the rusty-patched bumblebee, the state bee and federally endangered.

Volunteers have been an integral part of this restoration work, beginning with the first community volunteer event on May 20, 2000. Over 350 volunteers spent that beautiful spring day removing invasive buckthorn and planting prairie seedlings at the site. Invasive exotic plant species, such as European buckthorn, present the biggest threat to the native plant communities of oak savanna, tallgrass prairie, and the rare sand gravel prairie.

On October 23rd, 2004, about 80 volunteers had an opportunity to think like squirrels. Volunteers were asked to plant 4,500 acorns at an oak savanna restoration on old field on the property that had ealier been seeded with prairie grasses and wildflowers. Adding oak trees was another step in returning the land to savanna, the historic plant community.

In the course of these and other events, hundreds of community and Flint Hills Resources employee volunteers have assisted in additional buckthorn removals and other projects. 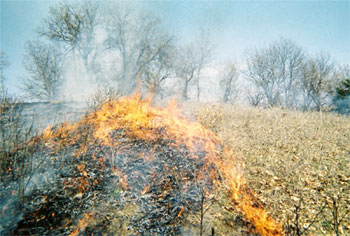 FMR would like to thank the Legislative Commission on Minnesota Resources, the National Fish and Wildlife Foundation, and Flint Hills Resources for providing the funding for this restoration project. We would also like to thank Flint Hills Resources for their long-standing commitment to this project. Their dedication has certainly helped to make the Pine Bend Bluffs Natural Area a healthier place.

Flint Hills Resources retains about 3,000 acres of land around its refining operations as a buffer to surrounding land uses. Much of this buffer land is in agricultural use or open space. In 2001, we were hired to examine the natural resources on this buffer property. In collaboration with Applied Ecological Services Inc. (AES), we conducted a natural resource assessment and developed recommendations on how the company could protect and manage a greenway system on this property.

During the natural resource assessment portion of this study, AES and FMR used aerial photography and conducted site visits to determine land cover and relative health of the existing natural areas. We then recommended approaches for improving these areas; developed a strategy for linking into existing natural areas; and presented tools for permanently protecting these natural corridors.