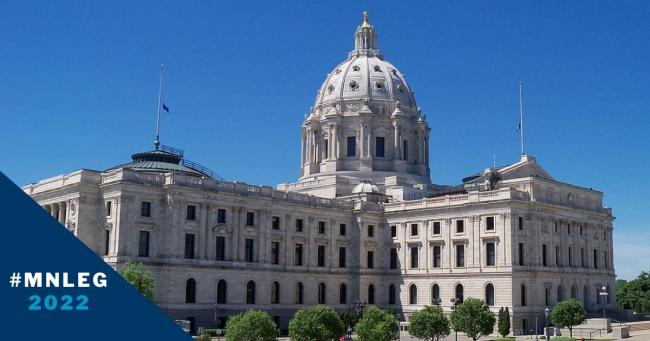 The 2022 legislative session concluded with little more than a whimper, as lawmakers took action on just a handful of the many bills that were up for consideration. The prospect of a special session looms once again, though there is no guarantee legislators will reconvene and make additional progress this year.

So how did FMR’s 2022 priorities fare this session? Here's a look at where things stand.

Earlier this session, both chambers advanced omnibus agriculture bills out of committee that included FMR's top priorities, albeit at very different levels of funding. Both are critical for the advancement of what we often refer to as clean-water crops.

The final agreement that passed combined both provisions into a single appropriation to the University of Minnesota, beginning in the next fiscal year (July 1, 2023). While the overall amount was much lower than we hoped, we're grateful the funding is included as "base funding" that should continue each biennium moving forward — exactly the strong, stable funding source these initiatives deserve.

Learn more about how our top two priorities fared.

The legislation includes funding for a variety of habitat and restoration projects across the state, including Metro Big River Phase 12 projects. This includes $643,000 for four FMR priority projects:

The second change allows the council to make supplemental budget recommendations in the second year of a biennium. This provides the opportunity for the council to weigh in on unexpected surpluses or shortfalls in the Clean Water Fund as revised and updated budget forecasts provide a clearer picture of the dollars available.

In 1988 (and twice since then), Minnesota voters approved a constitutional amendment to dedicate lottery proceeds to the state’s Environment & Natural Resources Trust Fund (ENRTF).

On the final weekend of the legislative session, lawmakers finalized this year’s ENRTF bill. One of the few bills to pass before the deadline, the bill allocates $70.88 million to Minnesota’s environment from the ENRTF. While it includes funding for a variety of important river and habitat projects, it also comes with some considerable controversy.

Learn more about the bill (and the controversy).

As we noted earlier in the session, the Senate’s Omnibus Environmental & Natural Resources Finance & Policy bill (SF 4062) included an alarming attempt to roll back the Minnesota Environmental Rights Act (MERA) in an effort to continue unsustainable groundwater pumping in the White Bear Lake area. The House bill (HF 4492DE4) included no such rollback.

MERA is one of our state's bedrock environmental laws, and we were disappointed to see this controversial language included in the Senate. Fortunately, the House and the Walz administration expressed strong opposition to any bill that included this rollback.

As the clock ran out on final negotiations, the MERA rollback provision was dead in the water. Some efforts aimed to replace the provision with a modest allocation to the Metropolitan Council to explore designs for long-term sustainable water supply options for the North and East Metro area — turning a huge threat into a small win for our environment. However, as is a theme this session, no final bill was agreed to before the clock struck midnight.

In 1998, Minnesota voters approved a constitutional amendment dedicating a portion of lottery proceeds to the Environment & Natural Resources Trust Fund. Since then, the fund has provided approximately $875 million in state lottery proceeds to nearly 1,800 projects around the state.

However, the constitutional dedication of lottery proceeds to the fund is set to expire in 2024. Renewing lottery money for the environment requires a statewide public referendum, which can only be triggered by the state Legislature.

Thanks in part to FMR advocates and the hard work of many environmental partners across the state, both the House and Senate advanced versions of lottery reauthorization bills, albeit with some major differences.

Both versions of the bill put the issue to voters — in 2022 (House) and 2024 (Senate). And both versions propose extending the amendment through 2050. They also increase the share of lottery revenues to the ENRTF from 40% to 50%, and direct unclaimed prize money to the fund as well.

In the Senate version (our preferred version), lawmakers would also establish a new Water Protection Fund that would receive the other 50% of lottery revenues (which would otherwise go to the state's general fund) for use in water infrastructure and drinking water investments across the state — including lead service line replacement. In the House, lawmakers amended the bill to allocate the additional 50% of funds to a new affordable housing initiative (which is highly unlikely to become reality given strong Senate opposition).

Lawmakers were unable to come to an agreement before the clock ran out this year, and no further action was taken. We'll be sure to bring this issue back before legislators during a special session (if the governor calls one) or during the 2023 legislative session.

The original House position included $44 million per biennium moving forward through the omnibus tax bill. The Senate’s tax bill included no such funding.

On the final weekend of the session, lawmakers finalized an omnibus tax bill agreement that included $12 million for SWCD funding per biennium moving forward.

While that’s a far cry from the $44 million SWCD’s need, it’s a huge step forward for stable SWCD funding. Unfortunately, as was the case with almost every other bill this year, the clock ran out before lawmakers could get the agreed-upon language across the finish line.

Stalled: Getting the lead out

Both the House and Senate heard bills that would fund lead service line inventory ($10 million) and replacement ($300 million) over 10 years and set a goal of replacing all lead service lines by 2032. Additional legislation explored a number of protections, including prohibitions on lead shot and tackle, as well as funding for lead abatement in schools, daycare centers and consumer products. Sadly, in one of the most crushing disappointments of the session, none of these bills became reality.

Likewise, action on lead tackle and sinkers, as well as lead testing and abatement in schools and daycare facilities and consumer products, failed to cross the finish line.

FMR has supported legislative efforts to reduce salt pollution in Minnesota for several years following the results of our 2016 State of the River Report, which showed an alarming increase in chloride concentrations in the metro Mississippi River. Behind the valiant efforts of Stop Over Salting, the Minnesota Center for Environmental Advocacy, Clean Water Action and others, we continue to urge lawmakers to act on this long-overdue legislation.

Sadly, salt legislation stalled in the House and Senate, and was not included in either chamber’s proposed environment bills — and was unlikely to find a place in the ultimately doomed final negotiations.

The Legislative Citizens Commission on Minnesota Resources (LCCMR) is the body charged with soliciting and vetting proposals for use of the state's ENRTF dollars each year.

After several years of controversy, the commission was a single vote short of making "official" recommendations this year, further shining a spotlight on the increasingly politicized nature of the LCCMR process.

To address this, bipartisan legislation would adjust the commission’s makeup. It would be comprised of nine citizens (appointed by the governor) with one member from each of the state’s congressional districts along with one member from tribal governments recommended by the Indian Affairs Council.

The Commission would also include eight legislators: two from each party in both the House and Senate. The arrangement ensures participation from across the state, while also ensuring that lawmakers don’t hold enough sway to outright block the commission from making recommendations (as was the case earlier this year).

While this is a helpful reform we supported, you can by now guess the outcome: Lawmakers were not able to come to an agreement before the clock ran out, and no final action was taken on the legislation.

FMR is excited to be a part of Fix the Pipes, an alliance of business, environment, local government, engineering and trade groups from all across Minnesota. While we don't always agree on everything, we all agree that clean water is essential for life and health.

That's why we teamed up again this year to ask Minnesota lawmakers to #FixthePipesMN and pass a comprehensive bonding bill that funds the replacement of aging water infrastructure.

Prior to the end of the session, lawmakers agreed in principle to a roughly $1.5 billion overall bonding bill, an unspecified portion of which would be directed toward the state’s water infrastructure.

However, as was the theme this year, no final agreement was reached, and the clock ran out before a bill could be passed.

While we are especially hopeful that a special session could include a bonding bill agreement, that is no guarantee the bill advances. Unlike other legislation, bonding bills must receive at least 60% support in both chambers. It remains uncertain whether House Republicans are willing to vote in favor of any bonding bill even if agreed to by leadership, thus dooming the effort altogether.

As MPR News reported, there is still a slim possibility of a special session to allow lawmakers to complete their unfinished business. If leadership can continue to make progress on agreements behind the scenes, the governor can call legislators back to St. Paul for a special session.

Many of our priorities are in bills that are near completion, meaning they could theoretically pass in a special session. However, larger and more complex legislation in other areas — including education, public safety, housing, child care and nursing homes — still requires a lot of work from lawmakers.

If a global agreement can be reached and a special session occurs, the House is going to want the Senate to pass spending bills first, then sign off on the tax bill. This is to avoid a scenario where the Senate passes a tax bill and goes home, leaving the spending bills in limbo. Conversely, the bonding bill must start in the House (by law), but it's not clear that the chamber can secure 60% of the votes amidst the House GOP's clear preference to leave further action until next year.

Sign up to become a River Guardian, and we'll let you know when important river issues arise (in a special session or otherwise). We make it quick and easy to contact decision-makers and make your voice heard. River Guardians are also invited to special events, including happy hours, to learn more about important legislative and metro river corridor issues.