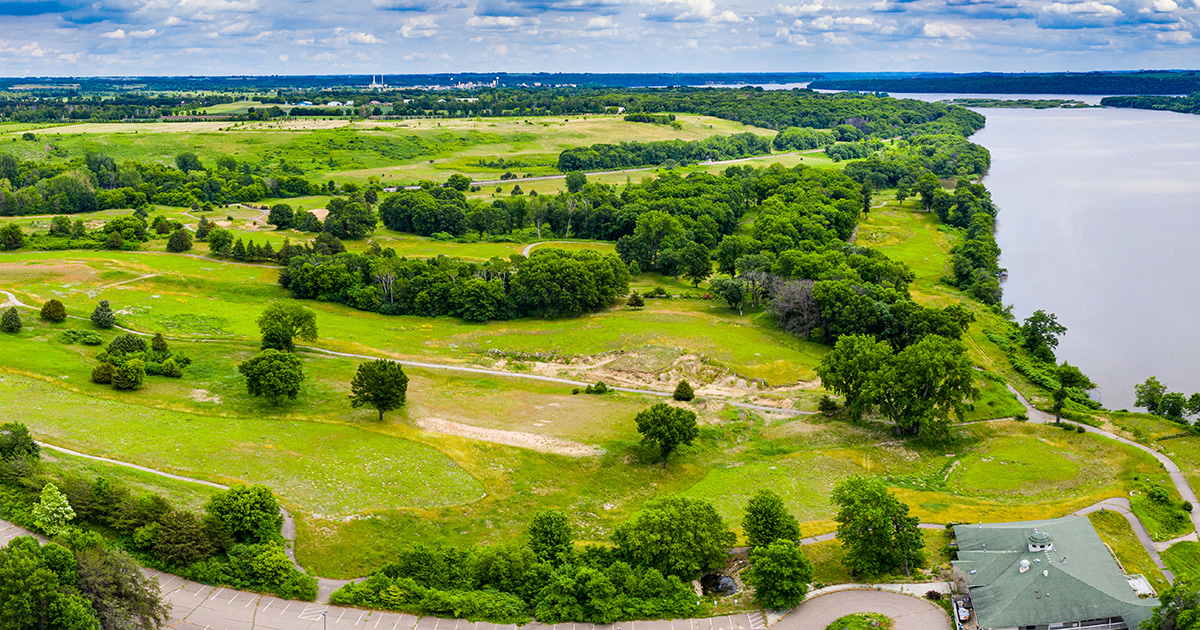 When the Mississippi Dunes golf course closed in 2017, FMR envisioned what it could become: a restored 180-acre riverfront park for wildlife and people alike. (Image: Tom Reiter for FMR)

On December 1, the Cottage Grove City Council voted to approve a master plan for the former Mississippi Dunes golf course.

Mississippi Dunes represents a once-in-a-lifetime opportunity to secure significant public open space along the river for the use and enjoyment of future generations of Cottage Grove residents. Very few large, undeveloped parcels of land with Mississippi River frontage remain in the Twin Cities metro area.

The city's decision about the future of the Dunes came at a time of surging demand for public parks and natural areas. At the same time, habitat loss is driving steep declines in many species of wildlife, especially the native grassland birds now using the site who require larger habitat areas for breeding.

The city seems to recognize these considerations in its own 2020 Mississippi River Access Strategy Report, which identifies Mississippi Dunes as Cottage Grove's highest opportunity for improving public river access.

Yet despite this enormous potential for public benefit, the city's approved Mississippi Dunes master plan prioritizes private development. The plan includes 37 acres of city parkland on the river, 12 acres anticipated for state purchase as an addition to the Grey Cloud Dunes Scientific and Natural Area, and 90 acres of development envisioned to contain up to 400 single-family homes and apartments.

While this modest riverfront park is indeed good news, it isn't what community members asked for.

Since last spring, Cottage Grove leaders have gathered community feedback on their plan for Mississippi Dunes. Residents spoke up at city meetings and an open house, as well as through letters and online surveys. The feedback that has been publicly recorded is almost unanimous: Cottage Grove residents believe Mississippi Dunes is too special for this intensity of development.

Residents consistently asked the city to make the Mississippi Dunes park bigger. Here's a representative sampling of the comments submitted to the city:

Cottage Grove leaders have said that they simply couldn't do anything more to protect additional parkland at Mississippi Dunes. But we beg to differ. There were far more tools at the city's disposal than it chose to use. That's the city's right, but constituents deserve to understand the distinction.

What could have been possible?

FMR has long valued the city of Cottage Grove as a key partner in our mission to protect, restore and enhance the Mississippi River. In recent years FMR has brought over $288,000 in funds and engaged dozens of volunteers to restore natural areas in Cottage Grove's existing city parks. Our partnership enhances habitat at places like River Oaks Park while minimizing the city's costs.

FMR got involved with Mississippi Dunes after the golf course closed in 2017, working with the property owners as well as Mayor Myron Bailey, Cottage Grove city councilmembers and staff to try to help the city purchase as much parkland at Mississippi Dunes as possible. We assembled funds to help support property purchase, arranged tours of another city's similar project, advised the city on tools and options, and spoke with over 120 community members who cared about the future of Mississippi Dunes.

While we're happy that there will be a Mississippi Dunes city park, we're disappointed by its modest size. Cities have many tools at their disposal to protect open space in their communities, and we believe that Cottage Grove could have chosen to use these tools more fully. (Read more about how cities can protect open space.)

Cities have the legal right to establish land uses, zoning designations and development standards that align with community goals. Cottage Grove doesn't have to allow such extensive development if the city determines that doing so does not meet the city's established plans and goals.

The city can also use the planning process to engage with a developer. For instance, the city could agree to zone for denser development in some parts of the property while reserving more of the parcel for open space. The city could purchase that open space at fair market value for use as public parkland.

Cottage Grove also could have halted development processes by adopting an interim ordinance (also known as a temporary development moratorium) in order to protect the city's right to plan for an area and the community's right to engage in that planning. This also could have bought the city and supporters more time to assemble funds for parkland purchase. By declining such steps, Cottage Grove chose not to use its full planning authority.

Funding partnerships could have led to more parkland

Cottage Grove did use one tool to secure some donated parkland at Mississippi Dunes: its park dedication requirements, one of which applies citywide and another specifically to riverfront areas. It's a good start.

The city is also negotiating the purchase of some parkland that the property owner was willing to sell. But we at FMR think the city should have tried to purchase or negotiate for more parkland to create the bigger park residents are asking for.

FMR has assisted cities and other public landowners with dozens of open space acquisition projects over nearly 30 years, from a riverfront soybean farm conserved and restored to prairie at William H. Houlton Conservation Area to the 1,300-acre corridor of protected lands known as Pine Bend Bluffs Natural Area. We are experts in helping communities assemble the funding, including gap financing, to purchase parkland.

In the case of Mississippi Dunes, we believe that more parkland could have been purchased if the city had more proactively worked with FMR or a similar entity. We encouraged Cottage Grove to enter that kind of partnership as far back as 2018, well before the current property owner signed a development agreement with Pulte Homes in 2021.

FMR did already raise a modest sum to contribute to the city's land purchase, and we could have leveraged that via other public and private sources into much more money. We've been open with the city, including in public letters, about what we have available and what we thought was possible to raise.

The city's forthcoming Mississippi Dunes park will allow residents to enjoy riverfront trails, launch boats and gather with family and friends. The planned park will be a community asset as it is. But when residents visit in the future, they'll also be able to look around at all the new development surrounding the park and realize how much more parkland and habitat could have been created.

While the outcome of this planning process isn't what we hoped, we're grateful to our partners and the 120+ community members we engaged who got involved and shared their visions for Mississippi Dunes. For some residents, this was their first time participating in local advocacy — but it probably won't be their last.

Cottage Grove and south metro residents will be tackling other Mississippi River issues in the years to come, from water quality to other development plans. Now we're a bigger, stronger coalition ready to continue our work protecting our precious river.

Want to join us? Sign up to be a River Guardian so we can reach out when conservation and development issues come up where you live.