by Karen Schik and Alex Roth 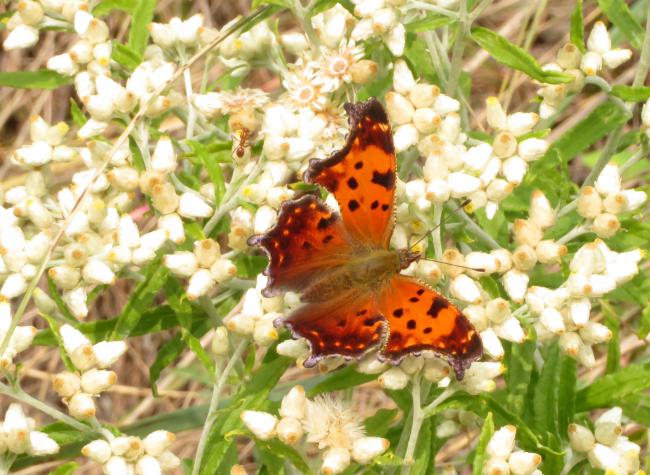 Thanks to pollinator surveys, we know that endangered species and other beautiful pollinators like this eastern comma find habitat in our prairie restorations. (Photo: Chris Smith, Wildlife Research & Consulting Services)

As pollinator populations have decreased and habitat fragmentation increased across the landscape, successful habitat restoration has become ever more vital. Prairie pollinator surveys we did at three restoration sites in 2021 showed high numbers of species present, some exciting increases, and a few surprises. This year and into the future, we'll continue to monitor and expand survey times to get more information on site trends and look for ways to improve floral and wildlife diversity.

Most dramatically, our surveys have shown that our restorations provide habitat for endangered species. We've found the rusty patched bumblebee at three of our restored prairies in recent years, one of which was a small garden at Old Mill Park in Hastings, similar to what homeowners might plant in their yard. Even small patches of habitat, if high-quality, can add to the lands supporting species at risk.

Still, we know many critters need corridors of connected habitat to thrive. Here's a deeper dive into our measures, findings, and next steps at two major restoration projects that make up hundreds of acres for wildlife in the metro area.

As FMR works to restore native plant communities at our project sites, we're always looking for ways to evaluate and measure the success of those restorations. The most obvious factor, of course, is the plants themselves. We survey vegetation before and after restoration, comparing the species diversity and abundance, or plant cover.

But plants alone don't make up a native community or ecosystem. We also hope to see an increase in wildlife that use the restored habitat. To measure that, we look at the number of wildlife species as an important indicator of habitat improvement, as well as the kinds of species present. If we don't see a particular group of animals at a site that we would expect to see given the restored habitat type, then we can employ adaptive management to provide the resources needed for those animals. For example, if we don't see early-season mason bees at a site, we might plant more early-flowering, fruit-producing shrubs like Juneberry, nannyberry, highbush cranberry, red-berried elder and others.

While we love seeing pollinators and other insects while we're out in the field, we also need objective data. Researchers interested in the success of a site often monitor birds, which FMR has done for many years through our breeding bird surveys. But as the decline of pollinator populations has become increasingly concerning, we've started to evaluate that group of animals as well. (Read more about insect population decline and what you can do.)

We began to convert the former agricultural field at William H. Houlton Conservation Area in Elk River into a 180-acre prairie in late 2017. A restoration like this will obviously increase diversity, since replacing a single crop like soybeans or corn with a mixture of native grasses and wildflowers means more plant species. But it's less obvious whether pollinators, birds and other species will follow the same trend.

Luckily, we've been able to contract with Wildlife Research & Consulting Services — and more recently with our new partners at Monarch Joint Venture — to monitor pollinator populations at the site. As we've written about previously, we had been seeing year-over-year increases in the number and diversity of bumblebee and butterfly pollinators as the 180-acre prairie continues to establish.

In 2021, we burned the final third of the prairie at the site (see an aerial video of that prescribed burn), transitioning the prairie from its initial establishment phase into a maintenance phase. It still may be years before some of the more conservative plant species, like rattlesnake master or prairie phlox, germinate and appear in the prairie. But for all intents and purposes, the prairie is up and running.

This past year, we expanded our pollinator surveys beyond just bumblebees and butterflies to look for additional pollinators, like other moths and bee guilds. With additional expertise, Monarch Joint Venture's surveys recorded the presence of cuckoo bees, metallic bees, leaf cutter bees, sweat bees, mason bees and carpenter bees, not to mention 10 species of wasps and countless other insect species. All in all, they recorded 4,584 individuals from eight different insect groups. And once again, the number of individuals we encountered during time-standardized surveys increased, as it has in previous years. 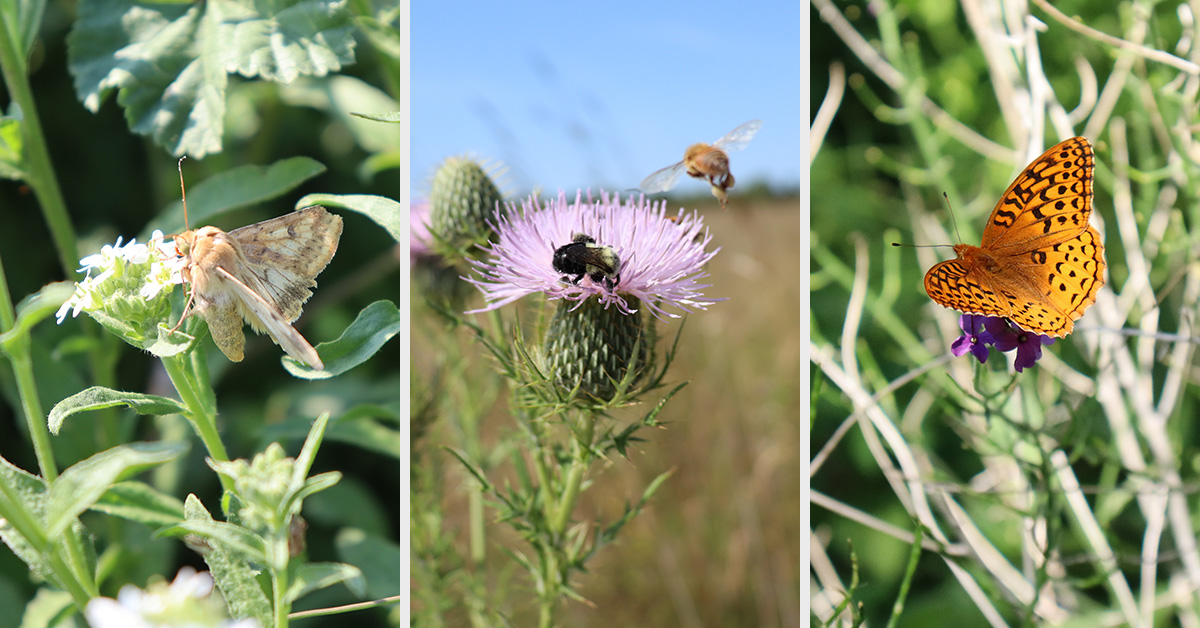 Contrary to our expectations, we didn't see continued increases in the number of bumblebee and butterfly species present in 2021. This finding may be telling us that we're still missing some of those conservative prairie plant species that might support specialist pollinators, but it's not a cause for alarm. If we were seeing declines in pollinator diversity or abundance from previous years, it could cause us to evaluate things like the timing of our establishment mows and prescribed burns. But for now, it points to some adaptive management strategies, like planting plugs of plant species that still haven't germinated from our seed mix.

Still, coupled with increases in bird diversity and abundance, these findings start to paint a picture of a functioning ecological community at this former soybean farm. 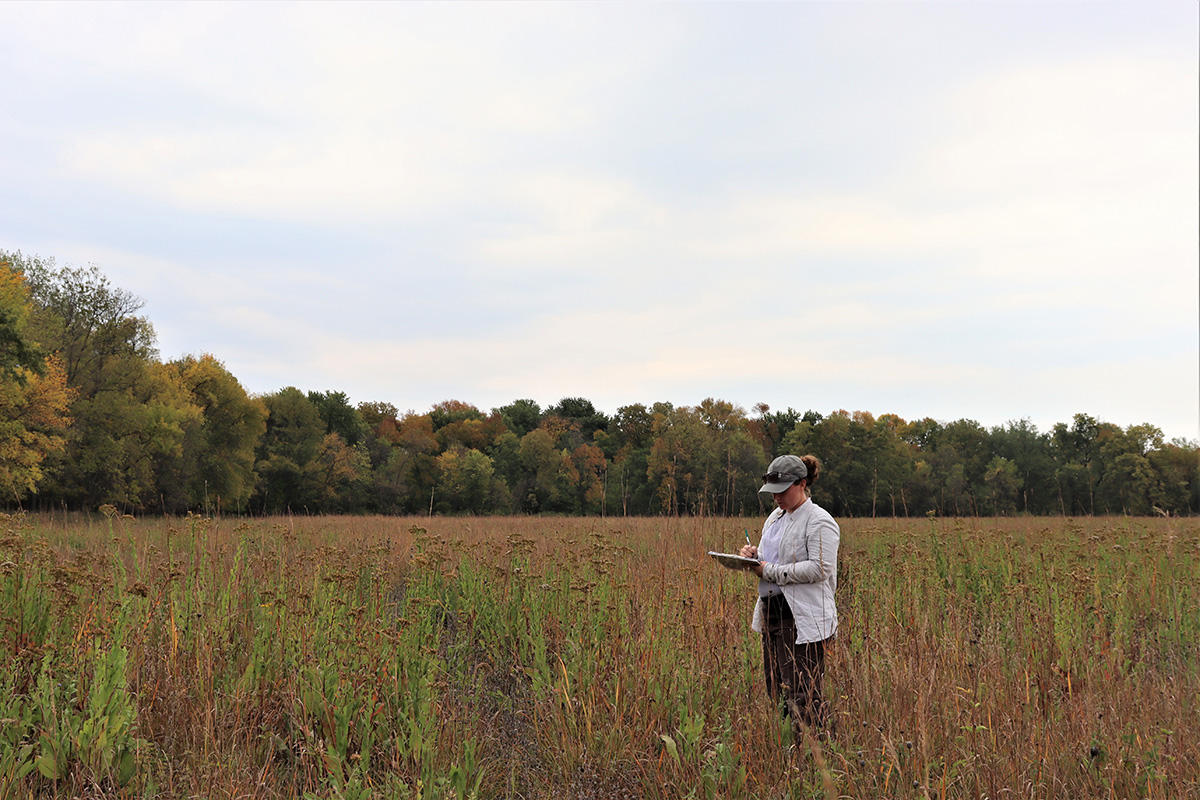 Our longest-running pollinator surveys have been at our longest-running restoration area at Pine Bend Bluffs in Inver Grove Heights. We've worked there for 22 years, and in the last three years, we've contracted with Wildlife Research & Consulting Services to survey bumblebees and butterflies. Since this expansive natural area has both restored prairie and native remnant prairies — or areas that have been prairie since before European colonization — we're able to compare our restorations to these rare remaining patches of intact habitat nearby.

But because our restoration at Pine Bend is further along in its development, we don't have a pre-restoration baseline to compare our findings to like we do at Houlton. That helps to explain why we don't have the same year-over-year increases here as we do at our newer sites. In fact, bee and butterfly numbers were down when compared to our 2020 survey data, though that was most likely due to record heat and drought in 2021.

Interestingly, in each year of surveying, the restored prairies had more bumblebee species than the remnants. While this is a strong positive indication that the restorations are successful, it's also important to look at species diversity, or abundances of each species. For example, if a site has ten species of bumblebees, but 90% of the bumblebees found there are just one species, that site has lower diversity than a site with 10 species with more equal numbers. Higher diversity indicates a healthier community — more robust and more resilient to disturbance.

The restored prairies had slightly lower diversity than the remnant sites, which is to be expected. While restored prairies incorporate a much greater variety of plants than were present before restoration, there are many species and conditions of native prairies that we aren't able to replicate. This is one of the reasons why we strive to protect and maintain any native prairie that remains — they are not easily replaced. The survey information can help guide our future management at the site and may provide an indication that we need more or additional types of flowers.

Although somewhat different than the remnant prairies, the restored prairies at Pine Bend Bluffs have high-quality habitat for pollinators, with diverse floral resources, loose soil with small animal burrows, forest edge and savanna. In 2021, we found many monarchs and twelve other species of butterflies, as well as seven species of bumblebees. One species was the yellow bumblebee, a Species in Greatest Conservation Need in Minnesota. 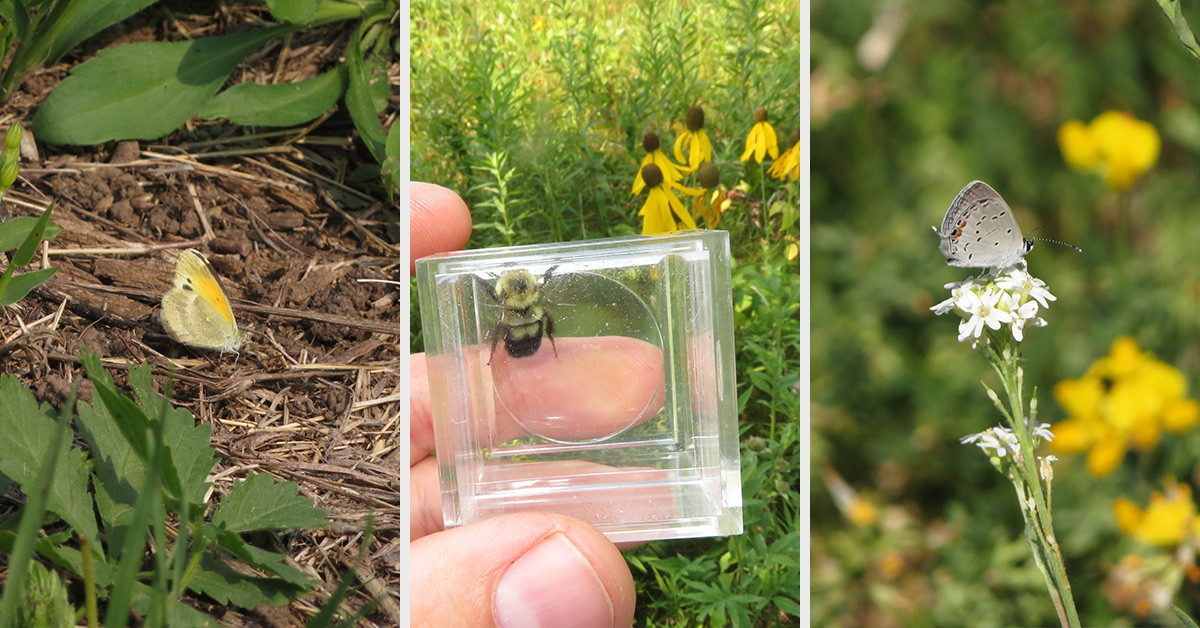 Our pollinator surveys allow us important insights into the efficacy of the prairies we're working to create. We're committed to wildlife surveys because they help us learn how to better support these complex communities so they grow and thrive.

When thinking about our prairie restorations, FMR has historically operated on the idea that "if you build it, they will come." That is, if we design and establish diverse prairies with plants of different heights, colors and blooms throughout the season, then insects and other wildlife will find these prairies and use them. Our wildlife surveys prove that to be true. We're thrilled to see each pollinator that finds the fuel and shelter they need at our prairie restorations.

We're able to restore prairies for wildlife and water quality thanks to FMR members and volunteers. If you'd like to get involved at these and other FMR habitat restorations, sign up for FMR's e-newsletter Mississippi Messages so you can find out about our upcoming volunteer stewardship events. You can also check out our calendar for current opportunities.