Why insects matter and what you can do about their decline 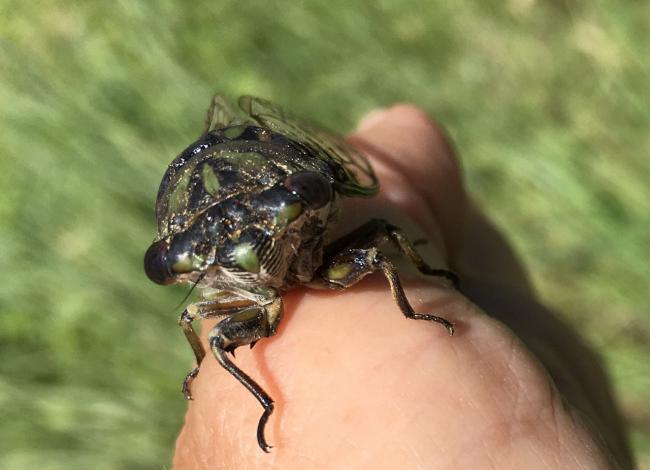 Cicadas aren't pollinators, but they and other insects are still crucial to our ecosystems. (Photo by Karen Schik)

In the past few years, news of the decline of insects throughout much of the world has raised alarm bells. Experts say the world is losing around 1 to 2 percent of its insects each year. By now, most people know pollinators are vital to making about a third of our food supply. But what about all the other insects — does this overall population decrease matter?

Is a clean windshield a good thing?

When I was a child back in the '70s, our family drove north every summer to visit relatives in north-central Minnesota, a distance of about 200 miles. We always had to stop en-route to wash insects off the windshield. At the end of the trip, my sisters and I had the job of washing the car, and I vividly recall cleaning off dozens of butterflies, bees, dragonflies and other bugs that were squashed in the grill and hardened onto the windshield.

It seemed the supply of insects in our world was vast and unlimited. And yet, in the same way we have managed to diminish other seemingly unlimited resources, the insect populations too have now decreased by 30% or more since my childhood. This summer I drove nearly 2,000 miles to Colorado and back and never had to clean the windshield.

Most people would probably be happy to see fewer mosquitos and biting flies. Should we care if we have fewer insects on the planet?

A comprehensive 2020 study published in the journal Science found considerable variability among 1,676 sites, but overall there was an average 9% per decade decline of terrestrial insects and an 11% increase in aquatic insects. (Unfortunately for us this category includes most of the “pest” insects that bother us so much, like mosquitoes.)

Another frequently cited study from western Germany documented an insect decline of about 75 percent over 27 years at 63 nature reserves. (See MPR News' article or National Geographic's review of this research.)

Generally speaking, scientists like me prefer to refrain from hyperbole. But these findings cause us to reach for the alarm.

Insects are a vital part of the food web, providing sustenace for birds, mammals, fish and other animals that are in turn consumed by humans. They both pollinate plants and help to control their spread. They also consume and break down detritus, feces and dead animals.

Insects are quite simply essential to our planet's web of life. So even if you're not a "nature person," your life (like that of all humans) still depends on their survival.

Locally, we can see the decline of insects in bird populations.

At FMR, we've been surveying breeding birds at some of our project sites for many years. While there's much to celebrate in our findings, we've also seen decreased numbers of some insectivorous grassland bird species, such as the American kestrel, loggerhead shrike, northern rough-winged swallow and eastern meadowlark.

As researcher Francisco Sánchez-Bayo at the University of Sydney in Australia put it in the National Geographic article, “If we don't stop the trend, entire ecosystems will collapse due to starvation.”

There are multiple causes for these declines, including climate change, insecticides, herbicides, light pollution, habitat loss, invasive species and changes in agriculture and land use.

Neonicotinoid pesticicides, or "neonics," are believed to be a major culprit.

The pesticide is systemic; carried through all parts of the plant. This means it affects any insect consuming any part of the plant, including bees that may come to the flowers. Neonics can also persist in the soil for five years or longer and can be taken up by flowering plants that they weren't intended for. They also run off the land into waterways, where they lead to the collapse of fish and insect populations.

Our focus in this article is insects, but as an ecologist, I also want to note that these chemicals have been found to harm grassland birds and increase birth defects amongst fawns born to exposed female deer.

And, unfortunately, researchers have also found that neonics do not increase corn and soybean crop yield, by far their most widely used application, when compared to alternatives or even no insecticides at all.

What can we do about it?

Although these substantial issues are beyond the scope of one person to solve alone, there are many things we can do together to support insects and their habitat.

At FMR, we manage more than 30 habitat restoration areas, many of which have shown success at increasing insect populations.

At the restored savanna and prairie at Pine Bend Bluffs in Rosemount, we've surveyed at least 10 bumblebee species — including the endangered rusty patched bumblebee and the yellow bumblebee, a species of conservation need — plus, 15 butterfly species, including hundreds of monarchs that gather in the fall.

You can join us to volunteer and be a part of creating habitat for insects and other wildlife.

The effects of how we landscape our yards show up far beyond our property lines. And a single yard has more power to impact habitat than you might think.

Follow these tips to support insects where you live:

Advocate for wildlife and habitat

Sign up as an FMR River Guardian to support legislation and enact changes that will protect the river and habitat.

Appreciate and learn about insects

The world of insects is fascinating. On our conservation blog, you can learn about Minnesota's rare native ladybugs, insects you might find in the snow, the stonefly, the sphinx moth, and much more! (Here are just a few of our reader's favorites: intern Allie's favorite insect sightings in the field, dung beetles, antlions, dobsonflies, hummingbird moth, fireflies, cicada killer wasp, crickets and katydids, mayflies, snow fleas, and leafy spurge hawk moth.)

Read more from our conservation blog.